I have a new found love for vodka and it started with a pile of unstarched, vintage linens.

For those who don’t know me, I adore starched, crisp linens. While I just can’t do enough laundry in the day to use linens for every catering job, there is nothing like setting a table with a starched napkin, and if it happens to be vintage, well all the better. If you come to my home for an event, you’ll be sure to find my preloved tables covered with vintage linens and a basket of fresh vodka-starched napkins on the counter.

It occurred to me a while back that while I spend so much time researching ingredients and products that don’t contain any additives or artificial ingredients, I was starching my napkins with a commercial starch product that was full of harmful toxins.

My guests would use these napkins to wipe their mouths and I thought it only made sense that these toxins that were keeping the napkins crisp, were making their way into my guests’ bodies.

A little research on Google and I came across a few ideas from others who had this same concern. I was drawn to the simple mix of vodka with spring water in a spray bottle. Seriously, it was that easy! I messed around with the ratio and found that 50:50 was the perfect mix for my liking. The more vodka you use, the stronger/stiffer the starch. I also like to put a few drops of essential oil to give a light scent. Right now, I am on a lavender kick. 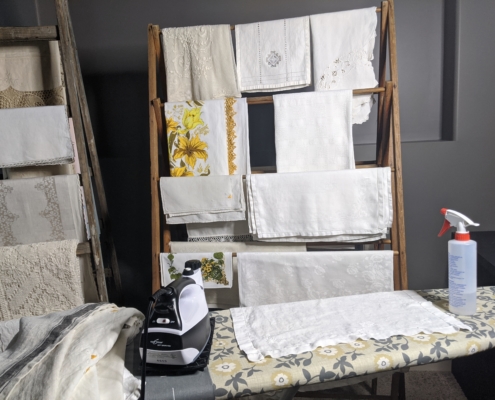 Turns out that it is the potato used in the making of the vodka that acts as a starch, causing the fabric to stiffen. During this dig to find a non-toxic spray starch, I found a few other reasons to keep a bottle of vodka in your pantry besides the obvious of course: vodka caesar with a a big prawn garnish! 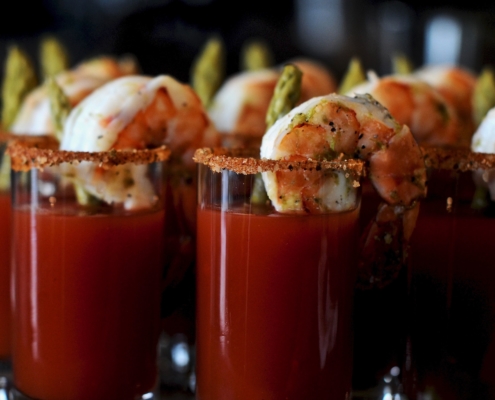 Vodka inhibits gluten formation so adding a couple tablespoons to your favorite pastry recipe instead of the ice water most recipes call for makes a fantastic, surprisingly flaky crust. My go-to pastry recipe below whether I’m making something sweet or savoury.

I go against everything I have ever been told about making pastry using room temperature lard and butter. I rub the lard, butter, and salt into the flour with my hands until it’s smooth and flaky, then I beat the egg in a separate bowl, before adding it to the mix with a little vodka in place of the ice water traditionally called for until it comes together as a rollable dough. Error on the side of too moist as opposed to too dry. You will be rolling it out in flour and it’s easy to incorporate what you need to get a perfect consistency. Adding moisture to an already mixed dough is hard and I find it toughens the finished product.

I also don’t refrigerate the dough before rolling it out. I roll it out, fit it in a pie plate or tart shells and then pop it in the fridge so it bakes from cold. Fill with your favorite filling and bake as indicated in your recipe. 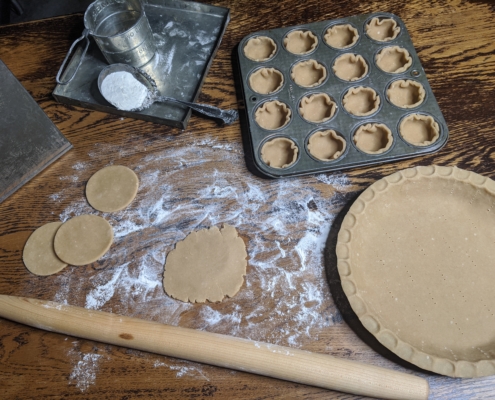 I’ve recently started experimenting with adding vodka in the making of a tomato sauce and the result is absolutely incredible! I was impressed with the texture and flavor and with a little more research, I found out a few contributing factors as to why:

There’s no need to be worried about cooking with alcohol as it evaporates after 20-30 seconds at 172° F (78° C). So any sauce or stew that is allowed to simmer or boil is hot enough to evaporate any alcohol meaning you don’t need to worry about getting tipsy unless your sippin’ from the bottle while you’re cooking.

Sauté the onion and garlic with olive oil in a heavy-bottom oven proof pan (that has a lid) until they are translucent and just starting to brown. Stir in the red chili flakes and 1½ tsp oregano, cooking for one minute. Add vodka and allow it to reduce to half on simmer before adding the tomatoes.

Stir in the salt and pepper, then put the whole pan into a 375° oven covered for 1½ hours. Transfer the mixture to a food processor and purée until smooth. Pour mixture back into pan, heat on stove and add 2 Tbsp oregano and heavy whipping cream. Simmer for half an hour and then toss in your pasta and top with cheese.

I always make this recipe in a big batch (x3 or x4) and I make it ahead as it always tastes better if left to sit in the fridge overnight and reheated. It freezes beautifully so I portion it out and freeze it to use at a later date, adding veggies or meat or reheating and using as a sauce. You can also replace the cream with one cup of cream cheese and use as a base on your pizza crust- YUM!

*Quick note on tomatoes, I use these fantastic ones I get at Scarpone’s Italian Store in Calgary. They are whole so I just squish them with my hands before adding. They have no salt added and no additives, just tomatoes and tomato puree. I just started canning my own tomatoes last year so if you have home canned, that is even better. 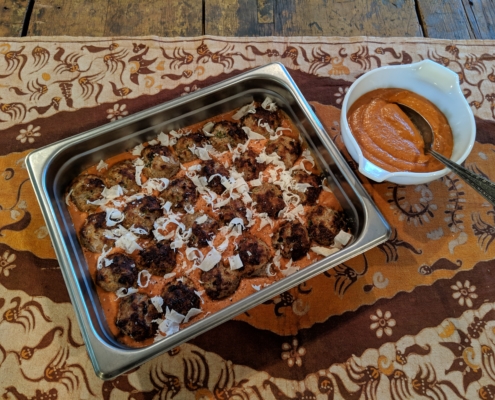 I use vodka in all of my brines/marinades. Vodka can bind with both water and oil which allows it to be carried into the meat more efficiently.

The flavor compounds in aromatics such as garlic and herbs only dissolve in fat. Alcohol (in this case, neutral tasting vodka) helps carry these compounds into the meat that’s marinating and at the same time, it carries water-soluble flavor compounds (sweet, sour, salty and bitter) into the meat’s cells. The result of adding a few tablespoons of vodka to your brine or marinade will noticeably improve flavor penetration and leave you coming back for seconds. An absolute must if you haven’t played with this yet.

Want to join the discussion?
Feel free to contribute!